Australian photographer Peter Lik is probably one of the most famous, and infamous, landscape photographers in the world today. His work dominates the conversation and the pocketbooks of a certain kind of collector.

Some sources put Peter Lik’s net worth at over $440 million dollars — almost certainly the biggest fortune photography ever produced. Greats like Ansel Adams or Dorothea Lange never came close to that kind of market success.

Peter Lik photos are such a commodity that he’s built a globe bestriding franchise. In over a dozen American cities, you can go to a Peter Lik gallery that sells only his work— a name, a brand, a veritable institution at this point.

These brick and mortar stores sell Peter Lik photos in massive limited editions (many have almost 1000 photos per edition) according to a controversial tiered pricing structure, with the last copies going for hundreds of thousands. And a 2015 sale of his “Phantom” photo from Antelope Canyon purportedly sold for $6.5 million, though some dispute this number. Whether or not you believe his work is top of the line, Peter Lik’s prices certainly are.

And what comes with this success is not only a large amount of genuine Lik photography, but also a bevy of photographers similar to Peter Lik, all trading on the industry he helped popularize.

No one is here to knock a photographer for finding success. If he can find such an enormous audience for photography in select corners of the globe, it likely helps other photographers. But the problem here isn’t the man himself, it’s the rise of Peter Lik style photographers who are flattening out a once rich and diverse field of landscape and nature photography.

To get a sense of the problem and the scale, let’s examine some of the copycats.

If you search “Peter Lik style photography for sale,” you’ll find an endless glut of otherwise competent, highly talented, and well-resourced outdoor or nature photographers aping the saturated color, stirring views, and thick glass framing that define a Peter Lik print. Some even use the same frames, printing techniques, and large format.

It’s easy to see why so many take this route: it’s easy. All you have to do is get a feel for his style and search a few simple questions:

Once you know about Peter Lik’s printing technique and camera set up, you can buy your plane ticket, visit a US State Park, and begin your own empire in the shadow of his.

The large demand to buy Peter Lik art spills over, with price-obsessed buyers picking up anything resembling his popular works. Especially given the high prices you can expect at a Lik gallery (beginning in the low thousands), there are plenty of spendthrift photography lovers looking for that special feeling without the special price.

With so many trying to undercut Lik on price, these photographers are in a race to the bottom. Rather than expanding the subject matter to define themselves and develop their own name, they are currently stuck selling their work as the value shopper’s version of Lik.

As we’ll see below, there is plenty of that Lik style to buy on the cheap. Let’s look at a few examples of his notable works that have been copied ad nauseum.

Peter Lik’s Tree of Life is one of the most beloved photographs of a generation. The red saturated image of a Japanese maple holding the sunset in the palm of its boughs is stunning.

Situated in the Portland Japanese Garden, this exact tree is easy to access, and so those looking to learn from Lik (or profit in his wake) have gone there to photograph the exact same tree in more or less the exact same way.

A fun photographer sojourn? Sure. Nothing wrong with that. But the examples continue. 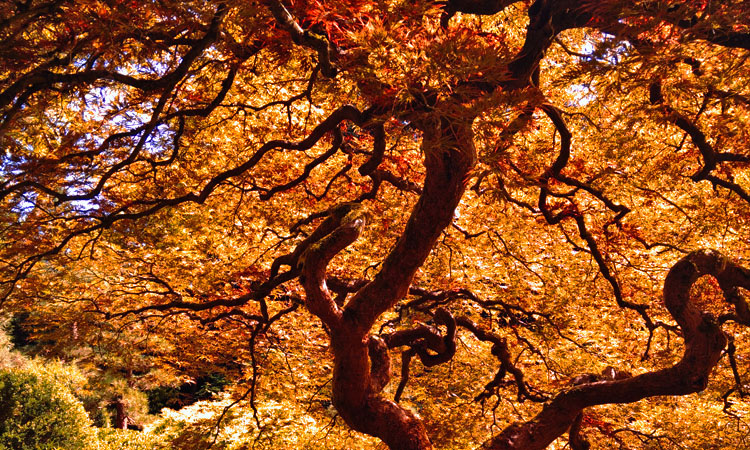 Example of a Japanese Maple which inspired the “Tree of Life”

The Bryce Canyon National Park in Utah makes for a great subject, especially in the Peter Lik art style of panoramas and bold colors. In fact, the red-orange stones with their odd bodies under a breathtaking blue sky has been a favorite of Lik and his Lik-a-Likes.

Here is Peter Lik’s Canyon Glow. And here are literally tens of thousands of images of Bryce Canyon, with some that are shockingly similar.

When we compare the two, the big seller and the copies, we find that the followers have a range of abilities and success. In some cases, those who take Lik’s direction actually outdo the master at his own game.

It isn’t that once Lik chooses to shoot at Bryce Canyon, no one else is allowed to, it’s that so many choose to shoot the same parts of Bryce Canyon in the same way. 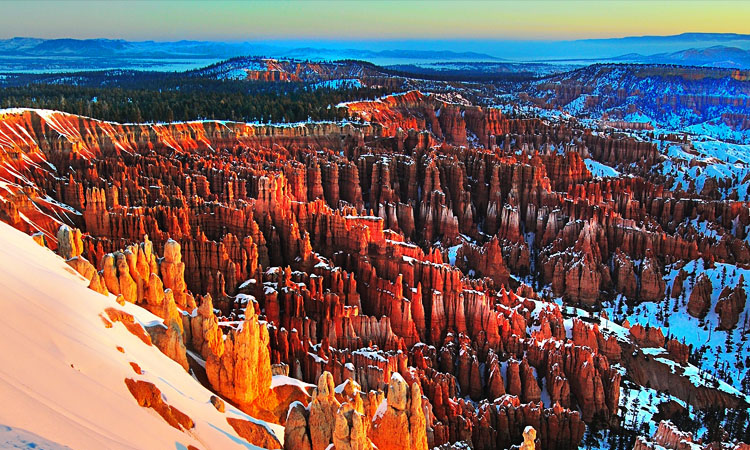 Example of Bryce Canyon which inspired the “Canyon Glow”

I’m sure Lik is secure enough in his own success to own up to the fact that some copies are superior to his originals. In those examples of Arches National Park (“Mesa Arch”), we find this pattern repeat. He captures a certain view, in this example finding the sunset inside the most famous arch feature of the park, and he does his Lik magic routine on it. Et voila!

But because the subject is available to anyone, the barrier of entry is too low to avoid clones. While Peter Lik’s First Flight is a classic with a little more imagination and access required, most of his work is of easy to access natural spaces.

Other photographers are at least able to recognize where a photo was taken and get something approximating the same composition. Once there, they can try their best. And as we’ve seen above, some are capable of great things with a camera. Just think what we might have if they struck out to find new subjects.

And to keep this under 100,000 words, let’s not go over the legion of other examples.

At first this might seem like a solution to the problem. If people are able to pick up Lik’s flag and carry it further, isn’t that development of artistic style? Isn’t that moving us forward?

It actually points to a great tragedy, because when we see these unknown photographers out-Lik Peter, we see incredible potential talent squandered in the pursuit of being the discount version of a success. This isn’t about either Lik or his doppelgangers being bad photographers, far from it, rather it is about Lik’s mega-success deforming aspects of the world of landscape photography.

So, you might be asking, what does that mean for the art world? 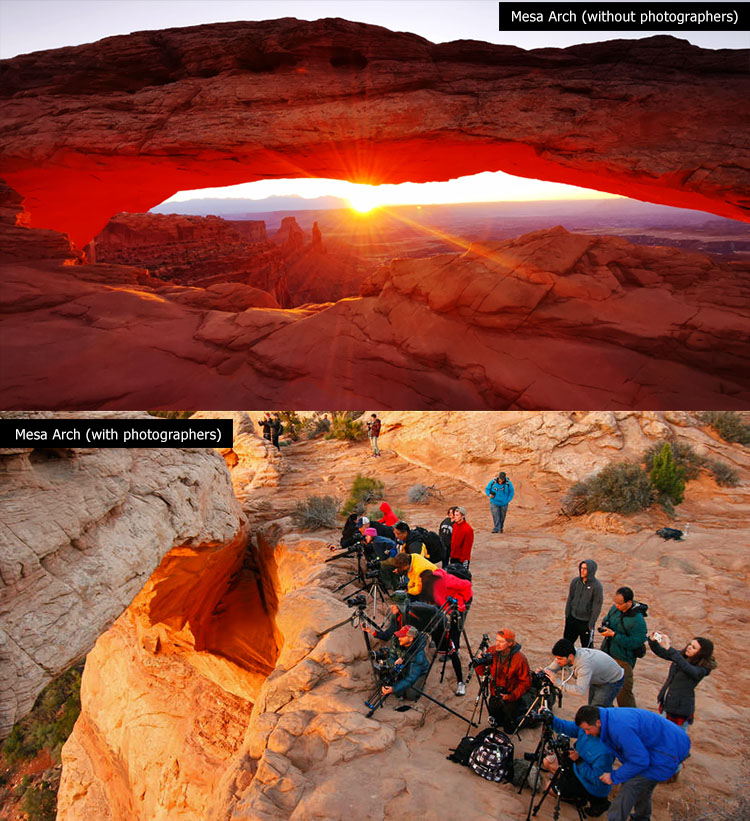 The Stakes for Fine Art Photography

So what about this is such a big problem for fine art photography? Sure, there are a lot of copycats, but if there is a market for this kind of thing, aren’t they just filling a niche?

Well, let’s consider what made Peter Lik photography the phenomenon it is today. He brought a definite style to universally loved subjects, then he spared no expense in presenting his work in the best possible light.

That vision and work ethic is commendable, and photographers new and old should definitely look to him for inspiration.

After all, inspiration is the fuel of artistic development. No one needs to reinvent the wheel. Every artist needs to develop their own taste and style by, at first, copying the works that speak to them. This is the learning phase that artists begin at and occasionally return to throughout their career. That process makes up a healthy artistic discourse, and we are all the richer for it taking place.

What typically happens after this phase is a branching out. The artist gains ability and confidence as they near the qualities of their heroes, and it is at that point they can begin self-exploration. They start to trust their own inborn intuition. They make connections between two influences and birth something new. They bring in motifs from their unique cultural background or from new mentors they find along the way.

But what happens if a generation of artists never takes that step from copying to self-exploration? What happens when the conversation turns into a chorus of artists chanting in unison?

It’s the art world turned into any other feature of industrial production: a flat world where nothing changes, and things stay the same, only more so.

The problem isn’t only on the side of artists. Buyers don’t help. Art lovers ask, “How much is my Peter Lik worth?” far too often, and they ask, “What is Peter Lik’s impact on art?” far too little. That print could be worth a lot, sure, but is it worth a generation of diminished photographic experimentation?

No votes so far! Be the first to rate this post.