Home / Blog / What Makes The Golden Ratio So Perfect?

What Makes The Golden Ratio So Perfect?

You’ve probably heard about the Golden Ratio at some point, but you might not be clear on what it is or why it is so important to understand. The Golden Ratio uses span architecture, engineering, and just about any art form you can think of — including photography.

And while the popularity of the Golden Ratio in art composition is what we think of most often, Golden Ratio examples occur frequently in the natural world, leading some to believe it has mystical qualities (that’s why it’s also called the magic ratio, the perfect ration, and even the divine ratio).

Before you can use the Golden Ratio to dramatically improve your photography, let’s figure out what it is.

How the Golden Ratio Works

It’s named after the Italian mathematician Fibonnaci who used the sequence to describe growth in a rabbit population. However, there is evidence of very ancient use of it in India. Today, it’s used to create computer models for economics, algorithms, optics, and to solve a wide array of mathematical problems.

So take our rectangles from above. If we cut the smaller part into two parts that follow the Golden Ratio and continue to do this, we can draw a spiral connecting the outer corners of these pieces, producing the Fibonacci Spiral (also called the Golden Spiral). 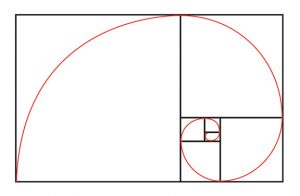 The Fibonacci Spiral is everywhere. Cresting ocean waves, sea shells, pine cones, and more. Because of its recurrence in the world, it is often considered the way to create the perfect spiral. As you can see, the Fibonacci Spiral and the Golden Ratio are deeply connected. Using one often means using the other. This is particularly true when using the Golden Ratio to compose photography.

So how can the beloved Golden Ratio and Fibonacci Spiral be used in your photographs? Through composition.

First, let’s define composition in photography. It’s the way an artist arranges images in the frame (or canvas, or paper, etc.). Different compositions create different effects. Symmetrical alignment of objects can create stiffness. Focal points on the top half makes an image top-heavy.

The photographer’s viewfinder is their canvas. They capture the world around them, lining up objects in a composition within a frame.

For help with composition, many photographers use a grid photography approach. They cut their image into a grid, making sure that important focal points land where the lines of the grid cross. This provides a guideline for crafting compositions, but there are more than a few ways to create this grid. Let’s compare perhaps the most popular kind (the Rule of Thirds) with the Golden Ratio.

Rule of Thirds vs Golden Ratio
Many photographers use the Rule of Thirds. This makes a grid by cutting the frame into thirds vertically and then horizontally, creating nine squares. This leaves four points where the grid crosses in the frame. Using the Rule of Thirds, a photographer would make sure that their focal point is at one of those four points, with leading lines running along the vertical or horizontal lines. (We’ll discuss leading lines a little bit later.)

If that grid uses the Golden Ratio, the grid will be drawn using the rectangular pattern we talked about earlier. Again, the important focal points of the photograph should land where the lines cross. That is why this method is sometimes called golden point photography, because the points where the lines on those rectangles cross create the composition.

But a photographer also needs the viewer to move their eyes across a photograph. Leading lines in photography are how you do this. People naturally follow lines through an image. While they might first look at one subject in a photograph, their eye will wander along lines. These are made by a horizon, a bridge, the ledge of a table, anything that produces a clear line. A leading line will take people’s eyes to important points in the image. (When lines take the viewer’s eyes to a vanishing point, they are called paths.)

By setting up the focal points using the Golden Ratio, the photographer can create leading lines that follow the Fibonacci Spiral. This makes photographs with strong, complex compositions that mirror one of the naturally occurring shapes in the universe. The Fibonnaci Spiral can bring the eyes through a swirl of focal points or just a few, but the effect is always a powerful motion that will make an impact on any viewer.

Final Thoughts
The Golden Ratio and Fibonnaci Spirals are incredible guides for composing your image. It connects your artwork with the patterns that make up the world around us, creating an experience unlike any other.

No votes so far! Be the first to rate this post.